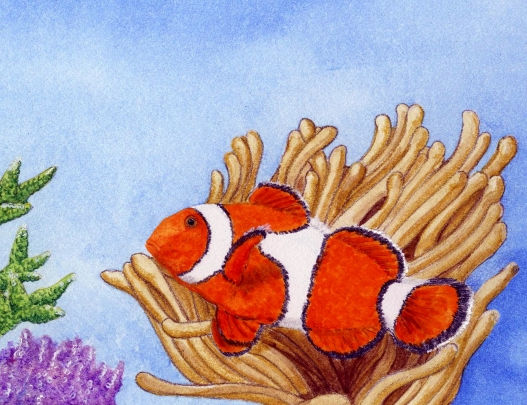 All Clownfish are born male but some will switch gender to become the dominant female in a group. For protection, they hide among anemone, immune to their poison.

Clownfish live in the shallow waters of coral reefs where they have a mutually beneficial relation with a few species of sea anemone. The anenome protects the Clownfish, and the fish's swimming aerates the water around the anenome. Clownfish are unable to move long distances, and rising ocean temperature and acidity is a threat to their coral reef habitats. Increased acidity also seems to impair their ability to navigate to their home anemones. 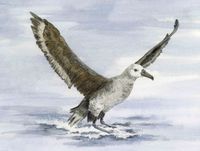 Black-footed Albatros
Almost all Black Footed Albatrosses live in the Hawaiian Islands. Like all species of albatrosses that breed on low lying beaches and slopes, they are highly susceptible to sudden flooding from sea level rise and storm surges. Thousands each year are caught by longline fishing and they are also threatened by pollution and ingesting plastics that float in the ocean.

Bicknells Thrush
The breeding habitat of Bicknell's Thrush is primarily restricted to mountain spruce forests of Northeastern US and Canada. They winter in the Caribbean and spring migration north is cued by day length. If spring arrives early in the north and the Thrushes arrive at their normal time, the abundance of food—insects and fruit—would already have peaked. Warming temperatures also produce an abundance of spruce and fir cones—feeding and increasing the population of Red Squirrels, a main predator of eggs and chicks. Storms and hurricanes threaten the Thrush's tropical winter habitat. Pollution, logging and deforestation threaten their spring breeding and winter habitats.

Staghorn Coral
In the last 30 years the Staghorn Coral population has decreased by 80% from disease, pollution, development and damage. Climate change is increasing the risk of extinction. Corals live in symbiotic (mutually beneficial) relation with algae. The coral receives nutrients and oxygen from algae, and the algae receive nutrients and carbon dioxide from the coral. Rising sea temperature increases algae growth so oxygen levels become too high for the coral, causing "bleaching"—the coral expels the algae and dies. Higher ocean acidity contributes to bleaching and also reduces the ability of corals and other marine animals to build hard shells. Other threats from climate change are sea level rise, changes in currents and storm damage.
Common Clownfish are effected by climate change because of:
Specialized Interactions

All animals have relationships with other species. Specialized interactions may exist between predator and prey; host and parasite; or competitors for habitat or food. They may be symbiotic (mutually beneficial) or parasitic and disease causing. Changes in climate or seasonal cycles can disrupt the sustainable balance of these interactions
Ability To Migrate

If an animal can only move slowly, for a short distance, or is blocked by barriers to its migration—high temperatures, too much rain, too dry soils, roads, cities, walls, fences, rivers, fields, forests or mountains—it may be impossible for it to survive in its native region or to move to a suitable habitat.
Rising Ocean Temperature

The oceans absorb about a quarter of the CO2 emitted into the atmosphere each year. CO2 dissolves in water, changing the chemistry of the seawater. Some marine species may benefit, but many are likely to experience harmful effects, such as being unable to produce hard skeletons or shells.
Sources
1. IUCN: Red List of Threatened Species
http://iucnredlist.org/