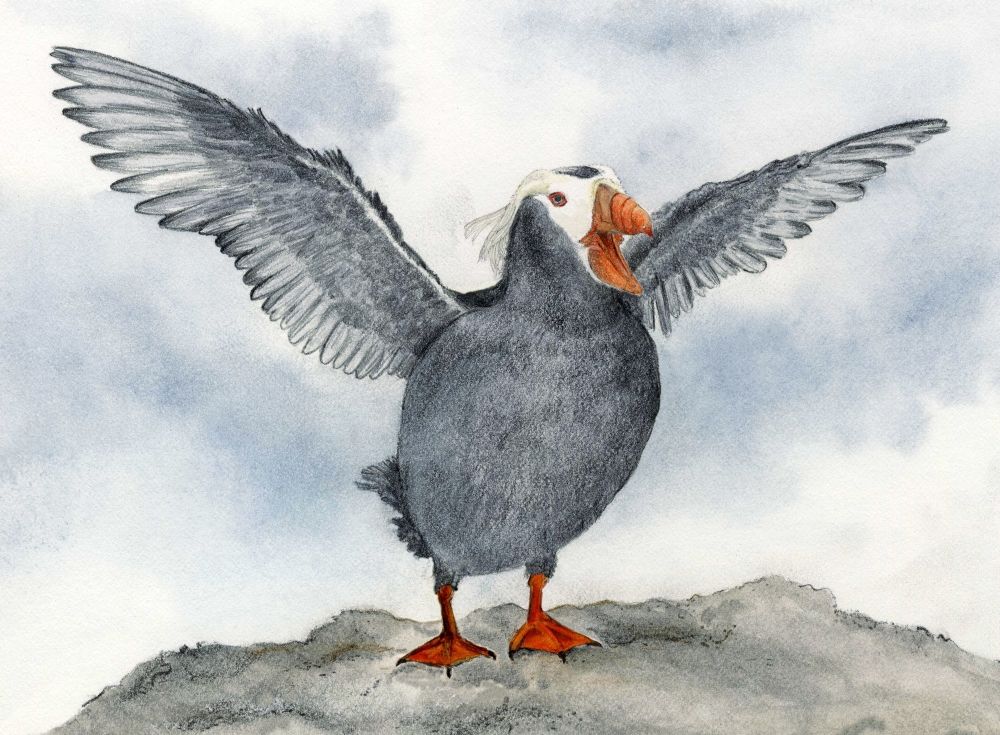 Puffins dive as deep as 200 ft. for food, stay under water for more than a minute, and fly up to 40 mph.

Tufted Puffins are threatened by sea level rise and storm surges which destroy habitats and breeding areas. In some areas of North America warming seas are causing the fish that the Puffins feed on to migrate farther north, making it difficult for them to find adequate food. Other threats are entrapment in fishing nets, oil spills, pollution, ingestion of plastic, human disturbance of breeding colonies and introduced predators such as rats and foxes.

Western Glacier Stonefly
Since 1960, the average summer temperature in Glacier National Park has increased by around 1 °C and glaciers have declined by 35%. By counting Stoneflies, scientists can determine how quickly glaciers are melting and the temperature of streams. In a two year search begun in 2011, scientists found the Stonefly in only one of the six streams it had previously occupied and discovered that it had retreated to two different streams at higher altitudes. Satellite data confirm that the world’s glaciers are declining, affecting the availability of fresh water for humans, animals and plants, and contributing to sea level rise.
Tufted Puffins are effected by climate change because of:
Specialized Interactions

All animals have relationships with other species. Specialized interactions may exist between predator and prey; host and parasite; or competitors for habitat or food. They may be symbiotic (mutually beneficial) or parasitic and disease causing. Changes in climate or seasonal cycles can disrupt the sustainable balance of these interactions
Rising Ocean Temperature

Sea level rise is caused mainly by glacier and ice melt and expansion as sea water warms. Higher sea levels destroy human and natural habitats by erosion, salination of freshwater and soil, and increased storm surges (flooding during typhoons or hurricanes.) Sea level has risen about eight inches in the last century, but the rate of increase has nearly doubled in the last two decades.
The Tufted Puffin is also threatened by:
Pollution

13. Washington Dept. of Fish and Wildlife: Status Report for the Tufted Puffin
http://wdfw.wa.gov/publications/01642/wdfw01642.pdf